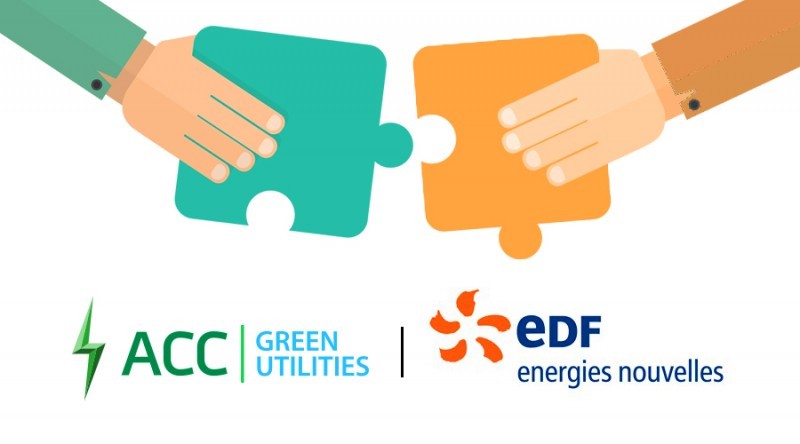 ACC’s business focuses on rooftop solar projects. It invests in the solar projects and undertakes the design, construction, and long-term system maintenance. ACC has invested in and built solar projects in the PRC for many of the world’s leading corporations, including P&G, Danone, Nestlé, Coca-Cola, Volkswagen, Unilever, Fujitsu, and others.

The partnership comes at a time of rapid growth for ACC. It has achieved triple-digit growth for three consecutive years and was named “The New Prominent Enterprise in energy industry in 2017” by the China Energy Development and Innovation Forum Committee and “Best Distributed Solar Developer” for 2016 by TÜV NORD, a world leader in the field of technology services.

Thomas Lapham, CEO of Asia Clean Capital, said “We are tremendously excited to work with EDF Energies Nouvelles, given their unparalleled experience and expertise in renewable energy worldwide. We will tap our respective advantages and help more companies generate and use green electricity.”

Operating in China for more than 30 years, EDF works in several segments of the energy market including nuclear power, renewable energy and energy services.

Bruno Fyot, Chief Operating Officer of EDF Energies Nouvelles added, “As a subsidiary of the EDF Group, a global leader in low-carbon energy, EDF Energies Nouvelles is committed to using its expertise in distributed renewable energy in France and in the United States, as well as EDF’s historic presence in the Chinese electricity market to develop and expand this newly formed joint venture with ACC”.

The EDF Group, a leading participant in energy transition, is an integrated energy company, working across the board of the specializations: generation, transmission, distribution, trading, power sales and energy services. World leader in the low carbon energy sector, the Group has developed a diversified generation mix based on nuclear power, hydropower, new renewable energies and fossil fuel power. The Group contributes to energy supply and provision of services to around 37.1 million customers, including 26.2 million in France. In 2016, it generated consolidated turnover of 71 billion Euros. EDF is a company listed on the Paris Stock Exchange.