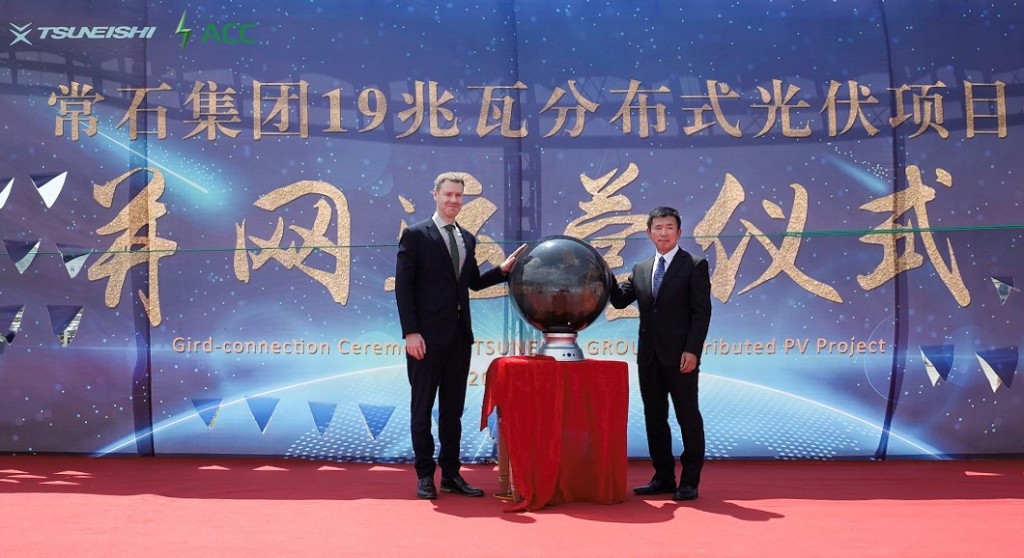 Zhoushan, PRC—4th August – The Tsuneishi Zhoushan Shipyard solar station, which was invested in and built by Asia Clean Capital Limited (“ACC”), has just been connected to the national grid. The system was installed on the rooftop of the Tsuneishi shipyard with a total capacity of 19 megawatts. Electricity generated by the solar station will be comsumed by the shipyard for its offices and workshops.

The world’s largest Building Integrated Photovoltaic (BIPV) power station —- The original roofs of the workshops were due for replacement and BIPV panels were selected as the ideal solution. The old roof panels were removed and replaced by glass-coated PV modules fastened by aluminum alloy brackets and stainless steel fasteners. This ensures a light-weight and durable rooftop structure. Integrating the solar panels into the roof structure helps reduce the overall construction cost. Over seventy-two-thousand PV modules were installed and the lifetime total power output is estimated to be more than 418 million kWh. The project is not only the largest BIPV project in the world, but also the largest distributed solar station in Zhoushan City.

Long – term cooperation under ACC EMC model —- Under the ACC cooperation model, ACC invests and owns the system and undertakes the design, construction, and long-term system maintenance during the contract period. The electricity generated by the solar system will be sold to the Tsuneishi Group at an agreed price to ensure operational savings throughout the lifetime of the system.